Brigadeiros are a treat you don’t have to be Brazilian to know or appreciate. The delicious latin american chocolate treats have a rich history, too… Read on to discover the cheeky story behind the dessert and its name, as well as where to get your own balls of fudgy goodness!

Brigadeiros: What Are They?

The traditional Brazilian dessert is a dense, sticky treat made of three simple ingredients: condensed milk, cocoa powder, and butter. Brigadeiros can have the consistency of chocolate fudge, since they share sugar, milk, and butter as ingredients. Once this paste is ready, bakers roll it into multiple small balls that they put into bite-sized paper cupcake liners. Most of the time, bakers cover the outside layer of brigadeiros with chocolate sprinkles.

The brigadeiro mixture can also be poured into a small container and eaten directly with a spoon. While some of us might know this mixture as part of indulging in some cake batter during baking, it has a specific name in Brazil! Yes, Brazilians actually call this version of the desert “brigadeiro de colher,” which means “spoon brigadeiro.” Sometimes, bakers make brigadeiros with white chocolate instead of cocoa powder. Whether you enjoy them as balls or by the spoon, white or brown, brigadeiros are always a delicious idea.

Nowadays, the traditional brigadeiro comes in all shapes, flavours, and colors – giving it the appearance of a bonbon. There’s coconut, pistachio, churros with cinnamon and dulce de leche, raspberry lemonade, salted caramel… each palate can find its flavour!

The History of Brigadeiros

Now, let’s get into the origin story for these little balls of goodness. Brigadeiros became well-known in the 1940s, when the Brazilian government rationed milk. This had the effect of popularizing alternative options like condensed milk for desserts, yielding creamy, sweet desserts like brigadeiros. 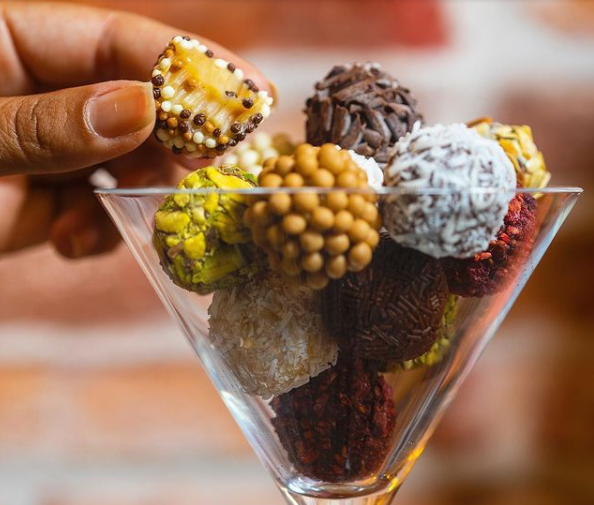 It seems these treats have a political history too: women sold them at rallies during the first national Brazilian election where they could vote, in 1932! The candidate they supported was Eduardo Gomes, a popular air force brigadier also known as “The Brigadeiro.” Apparently, when the Brigadeiro ran for president, he emphasized his bachelor status to gain support from the ladies! Indeed, a campaign slogan of his read: “Vote no brigadeiro, que é bonito e é solteiro.” This meant: “Vote for the brigadier, who’s good-looking and single.”

Legend has it that the women funnily named the chocolate treats made of condensed milk that they sold “brigadeiros” out of support for the presidential candidate. And this is how the treat got its name – and popularity. Who would have thought desserts and politics could be so intertwined! 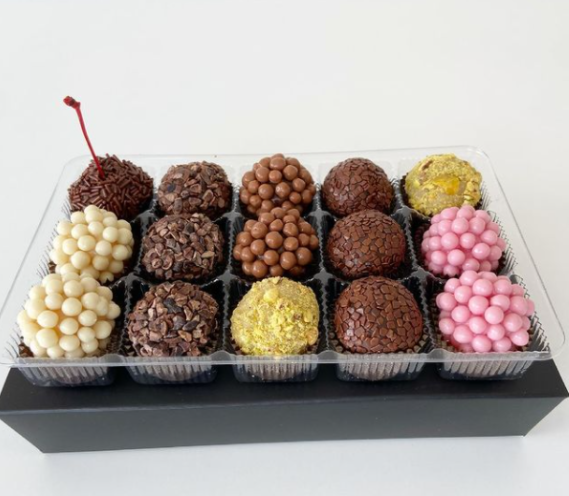 Over the years, chefs got creative with their own versions and flavours of brigadeiros, while still paying homage to the traditional one (Dulce Paradise)

The fundraisers led by Rio de Janeiro’s women in the political sphere were an integral part of Gomes’ campaigning. Unfortunately for the baker supporters, Gomes lost the election that year. Nonetheless, the latin american love for condensed milk did not falter… and neither did that of the brigadeiro! In fact, the treat seems to be gaining even more in popularity these days due to its convenient bite-size, creative variations, and of course, tastiness.

Here you have it, the history of brigadeiros, a confection that is sure to become one of your favourite treats once you try it. Needless to say, we would definitely vote for the brigadeiro – the candy, that is! Would you like a chocolate, strawberries and cream, or peppermint-flavoured brigadeiro? Just take your pick, or look here for brigadeiros near you. 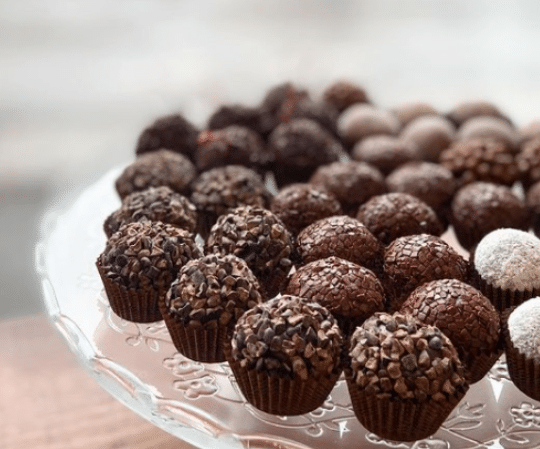