The Tale of the Soft-serve Ice Cream

Have you ever stopped and wondered what exactly is the difference between regular ice cream and soft-serve ice cream? Some people would say the texture, which is certainly correct. But in reality, there is no difference in ingredients. Food regulations even require that ice cream, whether soft or regular, contain pre-determined proportions of milk, cream, and fat, although this last one enjoys a greater leeway in requirements. So what explains the difference? It’s actually due to a component called overrun, the amount of air churned into the mixture, making it lighter and fluffier. Soft ice cream machines churn air into the creamy dessert, giving it its smooth aspect. This also helps companies save money, as there is less ice cream and more air in the same volume compared to its regular counterpart. It is also kept soft by being chilled less cool than regular ice-cream.

While Charles Taylor is credited with inventing the first soft ice cream machine in 1926 in Buffalo, New York, others claim to be first inventors themselves. For example, we have Tom Carvel, whose ice-cream truck suffered a flat tire on a day in 1936. He decided to sell some to people passing by, and discovered that people enjoyed semi-melted, softer ice-cream. Dairy Queen claimed the same with the invention of their own machine in 1938. There is even a common urban myth involving Margaret Thatcher herself. She worked in the late 1940s as a chemist for a food manufacturer who was at the time developing a soft-serve recipe, but her contribution is not confirmed. Perhaps the true creator of everyone’s favorite cold dessert might forever remain a mystery. However, we have witnessed soft-serve ice cream take over the world. The world, in return, has given it myriads of diverse flavours and influences. Let’s explore the various types of soft ice cream, from the most traditional to the most ambitious.

There is of course the classic soft-serve ice-cream. The kind that always hits the spot, especially on hot summer days. Swirls of decadent vanilla or chocolate can usually be found at major franchises such as Costco, A&W, and Dairy Queen. Some local shops also serve delicious treats with a 1950s throwback twist, such as Saskatoon’s Homestead Ice Cream & Novelties and Toms Dairy Freeze in Etobicoke, Ontario. There, you can find gourmet sundaes, soft-serve ice-cream with dips, toppings and coatings, complete with dozens of flavours and a vintage feel.

Recently, new international flavours have emerged in Canadian ice cream shops. Montreal’s well-known Kem CoBa offers soft ice cream with typically Vietnamese flavours, such as mango and coconut. The long lines in front of the shop definitely speak volumes. Ca Lem, also in Montreal, combines soft-serve ice cream with different Asian flavours, like litchi, yuzu, and black sesame. The South-Korean franchise Milkcow in Toronto, Vancouver, and Victoria serves unique combinations and flavours, all with a nice presentation. For the matcha enthusiasts, Matcha Zanmai is a Japanese tea house and dessert bar located in Montreal, and makes beautiful matcha-flavoured ice cream. In a very creative and unconventional fashion, Toronto’s iHalo Krunch serves soft ice cream with Asian-inspired flavours, such as ube, coconut, matcha, and Madagascar vanilla bean. In Squamish, BC, Alice + Brohm Ice Cream offer traditional New-Zealand-style fruit ice cream, as well as warm service in their community. Calgary’s LICS and Regina’s Milky Way create dozens and dozens of flavours of soft-serve ice cream and sundaes. In these ice cream spots, everyone is sure to find a flavour that will make their experience special.

There are endless opportunities for experimentation and improvisation with soft-serve ice cream. Some people love to decorate their desserts with toppings of all kinds, and many dessert places make decorating ice cream an art form. Chocolats Favoris specialises in gourmet chocolate and hearty ice cream toppings. This means you can dip your ice cream in a rich dark chocolate coating and top it off with chocolate chunks, candy, and coulis. Moreover, you can let loose at La Diperie and choose among many amazing and unexpected combinations of ice creams, dippings, and toppings. These range  from fruity, chocolatey, nutty, and everything in between. Finally, you can visit Halifax’s Dairy Bar, specializing in sundaes, nitro coffee, and soft ice cream with delicious toppings of all kinds.

For those keeping a vegan diet, there are plenty of options available. You might not know this, but IKEA serves vegan strawberry ice cream at a very modest price. Similarly, Crèmerie SWIRL in Montreal and Vancouver’s Virtuous Pie serve dairy-free ice cream that anyone can enjoy. 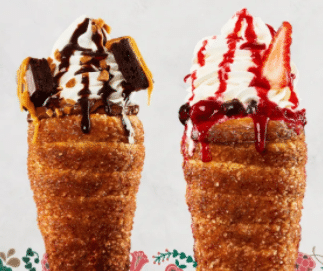 People might not often consider the cone the ice cream is served in. Why not explore different ways of creating the indispensable companion of the ice cream scoop? The aforementioned iHalo Krunch serves all their ice creams in their signature black cones made with coconut husk. Other places regularly let you choose between traditional, sugar, chocolate, or waffle cones. If you’re looking for something even more special, Eva’s Original Chimneys makes cones from chimney cakes. These are cylinder-shaped Hungarian pastries with a satisfying crunch on the outside and a light fluffy dough on the inside (doughnut cones).

With its ever-satisfying original formula and its endless possibilities for experimentation, soft-serve ice cream is one of the most fun and enjoyable desserts around. Whatever your taste preference and whether you like your ice cream simple or full of surprises, Dessert Advisor can connect you with a soft-serve ice cream shop near you.